Fort McHenry in Baltimore | Kids Out and About Kansas City

Fort McHenry National Monument and Historic Shrine, where the Star Spangled Banner was waving when it inspired our country’s anthem, offers a moving American history lesson for kids and adults.

We began a recent summer morning in Baltimore there. Admission is $7 per adult 16 and over, and kids 15 and under are free. The Visitor Center opens at 8 am, and early morning is a great time to visit because it is hot and sunny at the fort. We arrived with a picnic breakfast and ate it overlooking the harbor.

Then we doubled back just as the center opened, and the friendly park rangers ushered us quickly toward the film that was just beginning. The film was great: it was an historic re-enactment that was compelling and not cheesy. It sets the context for the visit well and ends with a theatrical flourish that leaves viewers feeling patriotic and a bit teary-eyed. 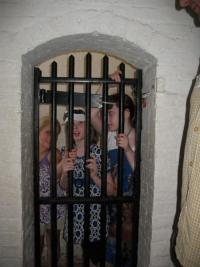 We enjoyed the exhibition in the air-conditioned center, then headed out for a short walk to the fort itself. The kids enjoyed exploring the fort, which shows how revolutionary-era soldiers lived with period displays. Not surprisingly, the biggest hit was the jail.

Best of all, our early arrival meant that we visitors could participate in raising the flag. A standard-sized flag flies overnight, but each morning it’s taken down and replaced with a flag that is extra-large to look more like the original Star Spangled Banner. On the day we visited, the flag was not as large as possible because of high winds, but participating in the flag raising, with commentary from the park rangers, was an excellent experience for all involved. I think kids—and adults, too—don’t think too often about the flag, but after a rousing film and a history lesson, everyone involved treated the flag-raising with reverence. It was a great and mindful way to begin the day.

Katie Beltramo, a mother of two, is Editor of Kids Out and About-Albany and blogs at Capital District Fun.