Eat Math, Burp Fractions: A Review of Eat Your Math Homework | Kids Out and About Kansas City 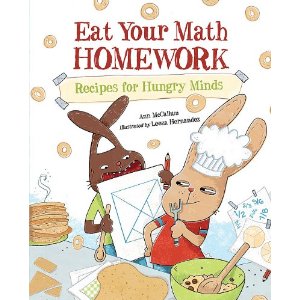 Parents who understand how important it is for kids not just to get good grades in math but really to GET it—to have numbers be their friends—are always on the lookout for excuses for kids to have fun playing with math concepts. And cooking is mentioned frequently as a way to acquaint kids with measurement while having fun. I tend to agree, and have written about this often.

So you can imagine how pleased I was to receive a review copy of Eat Your Math Homework: Recipes for Hungry Minds, by Ann McCallum, published by Charlesbridge this summer. But when I opened it, I was even more intrigued: This book isn't your typical "use the measuring cup to learn fractions" cookbook for kids. Rather, each recipe cleverly uses a math "appeteaser" to discuss a math concept (e.g., Variable Pizza Pi, Fibonacci Snack Sticks) and loads of fun facts and little jokes in and around the recipes to help kids understand the concept at a deeper level than they'd learn it in school. Mix in Leeza Hernandez's charming, engaging illustrations that tell a story themselves (these are NOT Beatrix Potter's bunnies!), and you have…something completely different from what you expect.

Not for Cooks Illustrated fans

What Eat Your Math Homework isn’t is a comprehensive cookbook whose focus is on perfecting every nuance of a recipe. In fact, there are only six recipes, and most of those are straightforward enough that 10-year-old kids can manage them completely on their own (a plus). So you can see that you don't really buy the book for a lot of food ideas. (As an aside: The recipes are not all for the health conscious, so those who are looking only for rabbit food, be aware of this. Fraction Chips and Variable Pizza Pi contain no sugar and are low in fat; the Tangram Cookies and Tesselating Two-Color Brownies are just what you might think; the Fibonacci Snack Sticks suggest probably-unnecessary miniature marshmallows; and the Probability Trail Mix contains M&Ms, though you can substitute anything you like into the last two recipes.)

I said above that Eat Your Math Homework is not for Cooks Illustrated fans, but that’s not true. I’m a fan of Cook’s Illustrated, which focuses on the theory and science of cooking. And I love this book. I guess it’s that I get my fix of theory in the math stories rather than in the recipes themselves. Ms. McCallum does the best job I’ve ever seen at communicating math concepts in ways that kids and adults can easily understand and appreciate.

I guess the fact that McCallum is also a math teacher has something to do with it… but math texts are written by math teachers, too, and those are impenetrable. This is great. I love the matter-of-fact way she clears up some mathematical confusions which bug kids, like the concept of infinity. And here’s the most straightforward explanation you’ll ever see for the concept of pi: The Greek letter pi (Π) represents the constant value that you get when you divide the measurement of the rim of a circle—the circumference—by the measurement of a line drawn directly across the middle of that circle—the diameter (page 31).

I think that 10 is the ideal age for Eat Your Math Homework, as long as that 10-year-old a) likes to cook and b) is not cynical… that is, she is willing to be seduced into learning new aspects of math by the illustrations, engaging stories, and sidebars. Fortunately, I had a cheerful 10-year-old handy: My daughter Ella spent a week looking through the book, figuring out the puzzles and enjoying the pictures, before finally deciding what to cook. (She made the brownies, whose secret ingredient really does make a yummy difference, although something went wrong with the texture, and we had a hard time cutting them into tessellating shapes.)

They can do it themselves.

Because the recipes are easy and use ingredients that most of us have handy already, pulling out Eat Your Math Homework makes for a perfect afternoon for parents who want to have fun with their kids and yet not have to do all the work. Really. You know how all of those cookbooks purport to be for kids and yet really require lots of parental involvement, where you end up expending most of the effort and the cleanup to boot? Not this one. Yes, your kids will consult you before putting the Two-Color Tesselating Brownies in the oven (at which point, by the way, they are one-color non-tesselating brownies) but for the most part, you’ll only have to look up occasionally from the book as they move from step to step.

Yes, YOU’LL be reading the book too. You’ll brush up on some math concepts, sure, because Ann McCallum’s explanations are clear, quick, and actually fun to read. But the real reason you’ll savor Eat Your Math Homework is illustrator Leeza Hernandez’s brilliant work. It’s not just that these bunnies aren’t your typical sweet bunny fare (rather, they remind me of Matt Groening's Life is Hell series—the precursor to The Simpsons—though considerably more upbeat), but also you could read the book just for the illustrations.

A 4-year-old could pick up the book and tell his own story even if he couldn’t read. For example, he’d show you that the wildly-kicked soccer ball on 19 sails through the book and is about to slam into the head of the M. C. Escher bunny on page 22. A mathematician (e.g., my husband) could pick up the book and shout, “Euler! The bunny on page 6 is supposed to be Leonhard Euler!” (He’d be wrong, though: I found out that it’s really supposed to be Fibonacci, but check out this famous picture of the mathematician Leonhard Euler, one of the popularizers of using the Greek letter pi in mathematics, and wonder with me whether that hadn’t somehow insinuated itself mysteriously into Ms. Hernandez’s consciousness as she was working on this book.)

In fact, the more culturally literate you are and the more you read Eat Your Math Homework, the more you’ll see some of the jokes in it that you hadn’t seen before, mostly courtesy of the illustrations. Read the text, and you’ll get more of the jokes. Read the text with your kids, and both of you will guess the secret behind the number that appears on each bunny (the last one is 39,088,169...and by the time you've read the book, that will make perfect sense).

Cooks younger than 7 or 8 will enjoy the illustrations, the stories, and the cooking, even if they're not up to all of the nuances of the math yet (though they will definitely understand some of it, if you read it to them). Kids 8-12 will like it because they’ll actually understand the math, have fun with the cooking, and try to figure out what each bunny is thinking (even if they don’t admit to doing that). Teens are probably a little beyond the book. But if a teen is looking for something to do with a younger sibling, it’s perfect. And as soon as they grow up they’ll enjoy it again.

This is truly the book that keeps on giving: I know there are puzzles we haven’t solved yet. I know that the diagram on page 27 has some significance. (Oh! And I just realized there is a chicken-and-egg joke. See what I mean?)

You’re not supposed to play with your food, right? But this book encourages kids and parents to play with their food together (literally, in the game Play with Probability on page 41). Along the way, both of you will discover that numbers are your friends. Just like bunnies.

Please enjoy Ella's interview with Leeza Hernandez, the illustrator, below.

© 2011, Debra Ross. For more information and ideas for playing with numbers, check out Ann McCallum's blog. The main Eat Your Math Homework site has useful info, too.