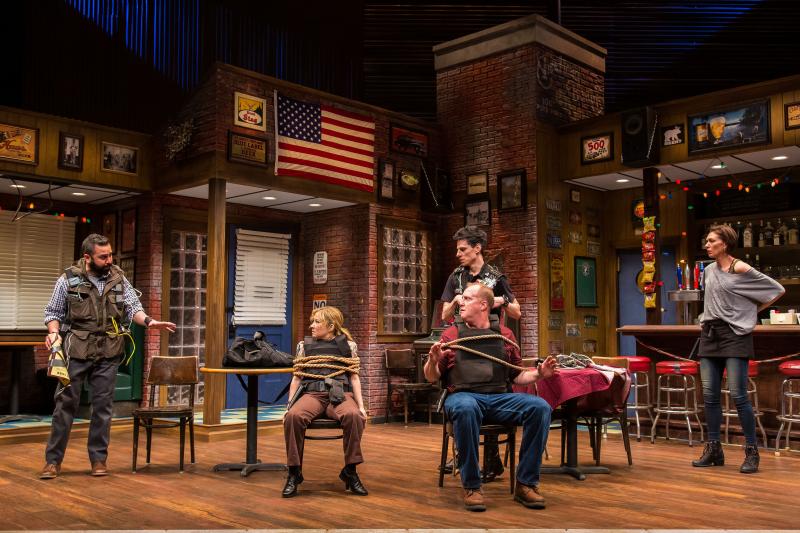 I was living in NYC during 9/11. About a month after the attack on the World Trade Center, a colleague reported she had seen a turbaned man with a bag bend down next to a building: “he tried to make it look like he was tying his shoe, but you never know,” she confided.

She had reported him to the police.

“He was Muslim. You can’t be too careful these days,” she admonished.

I was reminded of this incident as the world premiere of Hard Cell opens with college professor Nick Abtahi (Nuah Ozryel) bursting through the door of a midwestern small town bar, frantically seeking shelter from a self-appointed vigilante set on taking down the “A-rab terrorist.” This play is timely, leveraging comedy at its best to remind us of the sad fact that bigotry can rear its ugly head almost anyplace.

Great comedy is produced when you take quirky individuals out of their everyday context and put them in intense situations that exaggerate their eccentricities. Playwright Brent Askari has done this brilliantly with his play of mistaken – really, assumed – identities, and in a scenario that threatens to explode, in more ways than one.

With a world premiere, there is added pressure on the director and Aators to put their mark on the production and make it their own. Ir is rare that a world premiere comes along that is this funny, right out of the box. This cast and creative team has set the bar so high, it is hard to imagine Hard Cell without them in future productions. As always, Geva gives us a striking set, creative costuming and dynamic sound effects. The cast's impeccable comedic timing and well-developed characters set the stage for a festival of laughter.

As the resourceful bartender Jane Simons, Venessa Morosco is the perfect foil for Nuah Ozrel’s Professor Abtahi. Ozryel’s seamless transformations from college professor-on-a-quest to fumblingly-funny terrorist-don’t-wannabe adds to the merriment. Some of the machinations these two come up with to keep vigilante Evan Weathers off-kilter are uproarious. As Weathers, Patrick Noonan is superb, whether demonstrating the difference between “man out for a run” and “terrorist on the run,” or in confusing infidel with zinfandel. 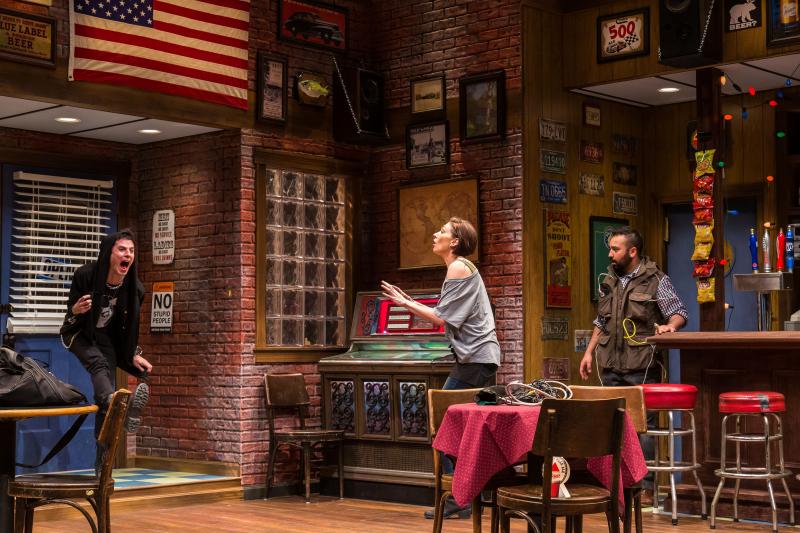 Just when you think it can’t get any funnier, Sean Patrick Doyle shows up as Derek Shirley, a goth groupie who signs on to intern as a terrorist. Compound this with Jennifer Cody as the petite, overzealous, inhaler-pumping, weapon-waving Sheriff Terry Burton. Noonan and Cody’s “lock and load boogie” is such a funny choreographed sequence, you’ll be seeing it in your dreams.

Congratulations to director Skip Greer, the actors and the entire creative team because, although the subject is serious, the treatment is pure, unadulterated comedy. From barkeep to bomb explosion, this play is a BLAST!

The world premiere of Hard Cell can be seen on the Wilson Stage through February 3, and trust me...you won't want to miss it.

Carol White Llewellyn is Editor of BeyondTheNest.com and the host and producer of Conversations with Creatives, a cable and online TV program that explores the arts and celebrates artists and their work.